The Role of Conventional Forces within the ‘Gray Zone’

The concept of conflict in the so-called ‘Gray Zone’ is basically developed within a framework where the dichotomy between war and peace has been overcome and solved under the traditionally established thresholds of conflict. This general approach may lead us to think that the role of conventional forces is limited to deterrence against a potential enemy, especially when in most cases these forces are not even included in a contingency plan.

Nevertheless, in recent years, it has become less and less unusual for some countries to outdo the obsolete approach to conflict in terms of peace and war, since the contrast between both concepts has been somehow diluted, maintaining its relevance exclusively from a legal point of view, but having lost it from the political-strategic perspective.

According to this concept, periods of peace did not necessarily imply a cessation of hostilities. The political objectives remained unchanged but they were achieved through other instrument and tactics. In addition, the traditional geographic boundaries of the battlefield now disappear, turning the entire geographic territory of the adversary into a potential battlefield, with the collateral consequence of a more definite impact on the civilian population.

These conflicts known as conflicts in the ‘Gray Zone’, are organized by keeping the whole of society as a battlefield, trying to achieve political and strategic objectives through the subversion of political structures, undermining public and private institutions, as well as destabilizing the moral of some elements of society, particularly the armed forces.

Therefore, by moving away from the prevailing conventions regarding the peace-war duality, and accepting that the adversary can develop activities with the intention of eroding the legitimacy of the State against its own public opinion with the intention of causing a lack of real or perceived governability, it becomes evident that the armed forces can become the target of this type of actions and they can also constitute one of the fundamental elements to face that threat.

The real difficulty in dealing with this threat lies in the lack of mental willingness to abandon obsolete and unsustainable concepts that may preclude the adequate anticipation of the necessary responses to the new threats and scenarios. It will therefore be essential to appreciate the ability of conventional forces to adapt themselves to the new threats, away from pre-judgmental attitudes.

In this new operational environment it is necessary to consider the required actions to maintain our own freedom of action, preventing intelligence activities on our capabilities, or those aimed at neutralizing this type of activities by a potential adversary. Four guidelines are therefore suggested:

The first guideline focuses on the arrangement of capabilities to exercise a credible deterrence on the adversary. Capabilities that should not only be analyzed as quantitative, but also from a qualitative perspective with requirements going from high levels of availability and readiness –even in peace time– to an effective and timely projection capability, and organizations where their main features will be determined by a quick adaptability to the new multi-domain threats without having to undertake long periods of preparation prior to the deployment.

The second guideline is centered on Defense Diplomacy, contemplating cooperative security endeavors including military assistance missions and support to third countries during a given conflict. Equally relevant is the ‘coercive diplomacy’ not only through deterrence but with the deployment of units in third countries or in international waters to warrant freedom of movement to enhance security and confidence-building measures in order to favor a de-escalation of crisis situations.

The third guideline is to encourage the integrated action of some armed forces units with the different State law-enforcement agencies, not only in drafting plans for the protection of critical infrastructures, but also in mission planning tasks. This integrated action necessarily has to be preceded by joint training between all Services concerned. In this sense, those countries with police forces of a more constabulary nature may have more immediate integration mechanisms. However other collaboration options between police and military armed forces in the national territory must also be studied.

The fourth and last guideline which is considered necessary to maintain freedom of action –considering that activities in the ‘Gray Zone’ are mainly carried out through the exploit of the cognitive effects of the information domain– focuses on information protection measures and in the upkeep of morale and trust within our units. In societies increasingly distant from the reality of conflicts and immersed in the revolution of information technologies, these measures are not trivial and will certainly contribute to the resilience of those societies in which they live, as opposed to the activities in the cognitive domain.

Military capabilities are defined in the Defense planning process and are grouped into capability areas according to the requirements established for the Force. Generally speaking, the following capabilities can be established: command and control; engagement capability; situation awareness; projection; sustainment; survival and protection; and contribution to the State action.

Consistent with the guidelines spelled out in the previous section, the main military capabilities are shown in the following chart: 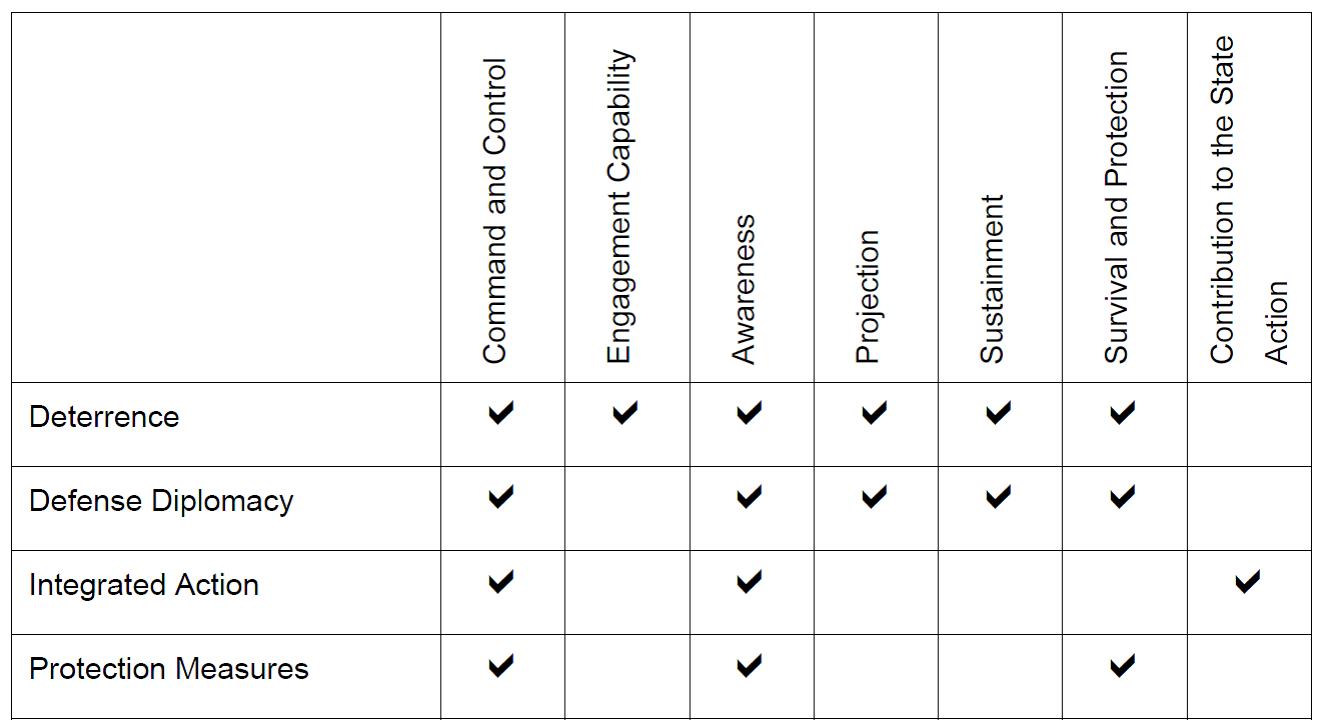 The distinctive environment of conflicts in the ‘Gray Zone’ requires conventional units to be ready to face challenges ranging from incidents originating in traffic accidents, or criminal activities magnified by propaganda campaigns, to demonstrations or –in the worst scenarios– actions perpetrated by insurgent movements spurred by minorities present in these countries. In all proposed guidelines, the key elements are: command and control and awareness of the situation.

On the other hand, adversary actions will require, from the command and control point of view, more flexibility from unit commanders to adequately adapt their performance to the conditions of the environment, acting at all times with the goal of achieving and maintaining the initiative within their area of ​​responsibility. This implies that commanders must be given responsibility, authority and the necessary instruments to achieve and maintain this initiative.

Actions in the ‘Gray Zone’ represent a kind of coercion that combines conventional and unconventional activities that should be understood within a wider context. To properly deal with all of them, it is necessary to generate and maintain an organizational capability that can translate initial decisions into actions, showing great adaptability to the operational environment.

To this end, conventional forces must gradually enhance their projection capability by increasing their level of readiness and availability. In addition, they should progressively begin to develop missions nowadays conducted by special operations units, as we cannot ignore that –except in case of deployments under the umbrella of an international security organization or upon request from a third country– the operations of the armed forces will be limited, almost exclusively in situations of conflict in the ‘Gray Zone’, to advisory tasks and military assistance to the military or constabulary forces of a host nation.

In this type of conflict, the armed forces must protect themselves against manipulation or misinformation operations, mainly in third country deployments where they will not only have a deterrent presence on the ground, but they will also have to live and train. All this in a social environment that can become vulnerable to rebellion or protests.

Finally, it is necessary to point out that one of the most effective measures to protect our forces will be to build and maintain public support in our own national territory and in third countries through communication campaigns, collaborative activities with civilian authorities, and their active integration into society, which will also contribute to strengthening the resilience of these societies against actions in the ‘Gray Zone’.

Samuel Morales is Lieutenant Colonel in the Spanish Marine Corps